You are currently in the lands of the great Notis Empire, the only current large cohesive group of humans, except for some savage mountain tribes. Humans have barely scraped by, and as their farming technology is fairly rudimentary, they have had to make repeated forays into the great forest that surrounds large swathes of the empire. On the other side are massive uncrossable mountains filled with giants and savage tribes. With no other choice, the empire has been forced to expand into the hostile and deadly forests to feed their people and acquire more resources. It quickly becomes clear that the forests used to be a massive empire of non-humans, as magical and dangerous ruins are being found in the farther reaches of the forest. You were forced to immigrate to one of the outer towns near the edge of the forest to feed yourselves. However, repeated attacks by increasingly confident goblins have damaged the town you were sent to and the guard force is not nearly large enough. Crime runs rampant, and just as it seemed that it couldn’t get worse, the forest starts dying. Leaves falling of trees and animals just collapsing where they stand. The mayor has offered to pay you all the money he can scrounge together form the near-empty coffers to pay you if you can capture a goblin chief and learn from him why the forest is dying, as it is the only thing feeding his people.

You went to the goblin’s camp to capture the scroll of dispelling to free the troll form his curse of silence. This way he can tell you a secret about the wizard. You fight through the camp and retrieve the scroll, and then free the troll from his curse. You learn that the wizard can not leave the presence of a crystal ball. You go to fight with him and discover he is an illusion conjured by the cultists! When you fight of the orcs, goblins and cultists you break the orb. The spirit of the forest had been trapped in there and is now free. You go back to your village and collect your reward.

You learn of a den of cultists near the town. You go to clear it out and successfully cut your way through the hideout. The leader of the cultists escapes, but not before you recognize him as a prominent noble of the area. You go to expose him to the king, but are attacked by corrupted guards. When you finally escape them and are about to expose the noble to the king, the castle comes under attack. The noble flees and joins the other side, and so it becomes clear he was with the cult all along.

Chapter 3
You are given a modest force of soldiers and sent into a nearby cave to stop the cultists from summoning a demon. When you enter, wave after wave of cult members and demons pour down upon you. You barely cut through them, suffering heavy losses. You fall back to a more defensible position and defeat them once and for all, but not before your ally, a dragonborn, is taken prisoner

Chapter 4
You stop the summoning ritual, but only the creation of the demons form. It’s spirit still escapes and possesses your dragonborn allies body. You fight him in a long, drawn-out battle and finally prevail, freeing him from the demons curse. You rest, but not for long as you are called upon to chase after the corrupt noble who escaped during the fighting. You chase him to his hideout and fight your way in. You deal him a killing blow but before he dies, dorsean the ghoul king speaks through him, promising your death.

Chapter 5
You discover where dorsean is to be summoned and arrive there before the cultists. When they arrive you ambush them and kill them all. You discover from the cultists notes that Orcus is to be summoned in the forsaken woods. You are to far away to get to it in time. However, despite summoning dorsean being a ruse, this stronghold does boast a portal to the abyss. You enter, hoping the differences in distance and time will allow you a speedy arrival. However, in the Abyss you are ambushed by an ash dragon created by Orcus and some of his highest disciples. You cut through them, losing nearly all your soldiers and some members of your closer party as well. You reach where the ritual is to be preformed.

Chapter 6
You enlist the help of Sharlikeen, the Liche king, and enter the underdark. You search for the ritual chamber, moving through the tunnels as they progressively get hotter and hotter. You fight through small armies of cultists, demons and hobgoblins with your armies of soldiers. You begin climbing a large rise up to the ritual chamber, but an elder red dragon attacks you. You fight it as you climb, finally reaching the top. You are attacked by the dragon, a massive demon, two drakes and a host of lesser creatures; very few of you survive, but you stop the ritual. However, the High Priest himself escapes.

Chapter 7
The Cult Leader Zekeelorev escapes and flees to a hobgoblin fortress. You must sneak through the wall and reach the stronghold. Then you fight your way in to him or convince the hobgoblins to turn him over. Then you survive an assassination attempt on the way home, and reach the castle. However, the king is captured right before your eyes and you follow him through a portal.

Chapter 8
You enter a world of limbo, which is currently the vessel for a primordial wizard. You must complete a series of tests to escape, and in the end you revive him and he uses his staff to tear his way out of the dimension. You arrive in the abyss, where you ally with Blan Vlastir.

Chapter 9
You fight your way into the drow stronghold, fighting up through the outer defenses and finally into the citadel. Here wrath kills a drider (half dark elf half spider) and you free an oracle. She tells you the way into the city of bone.

Chapter 10
You sneak through the icy caverns under the earth. Under the pressure of the cold, the hunger and the danger tensions rise, eventually breaking out into a heated argument between wrath and Shauna. They argue for a long time, and finally everyone disperses. A few minutes later, wrath and Lucan Avenoir are about 40 meters behind the group when they are ambushed by members of The Cult of Orcus. Shauna uses his magic to stop their cries for help and eventually attacks them as well. He joins the cultists, but Gramorn Udoben eventually stumbles upon the skirmish. He joins the battle against the cultist along with moonshadow, the druid. They butcher cultist after cultist, and finally Shauna unleashes a massive blast at Wrath. He goes down with at least 20 cultists lying dead around him. Shauna escapes with the remaining cultists, but not before being badly burned by the dragonborn, Alki’lir.

Chapter 10
The other adventurers continue on, fighting into the dungeons of the City of Bone and freeing the king. Finally, they fight their way into the throne room. Talos the Returned, Claeme Norsgar, Shauna and Dorisean wait for them there. Dorisean summons Slaz-Mikir before leaving them for dead. Eventually they drive back the enemy, killing Claeme and Talos. However, the Druid Moonshadow dies, Gramorn Dies, the Thief of the party dies and everyone else is badly injured. However, they are able to save one of their party members with a scroll. Shauna escapes on Slaz-Mikir and the rest of the party escapes back to the material world in triumph.

Chapter 10
After a brief time of rest, the party must once again return to the abyss to finally attack and destroy the city of bone. The human armies fought a long, pitched battle against the ghouls, cultists and goblinoids who held the city. During the battle, silica destroyed the temple that kept the dragon Slaz-Mikir bound. With the combined might of the heroes and the dragon, Dorisean was defeated and the city was captured, but at great cost. The traitor wizard Shauna was slain, as well as a cleric of bahamut who was a member of the adventuring party. Victory was theirs, and Orcus was driven back, for now…

Chapter 11
As you attempt to fight the hobgoblins, political tensions break out between Cane White and Lord Amol. During this time the hobgoblins attack. You do a few scouting missions and discover a strange shadow monster which controls creatures. It references things called “the things in the dark”. Then you prepare with the other wizards to cast a massive spell to drive of the hobgoblins.

Chapter 12
The spell misfires, and with a loud crack the massive release of magical energy tears a rift between dimensions. Demons, ghouls and shards of pure shadow pour from the skies. As this happens, the martial factions of hobgoblins enters into full out war with the monastic faction of hobgoblins and the humans go into a sort of cold war with the elves. IT quickly becomes complete chaos, and as you and some loyal soldiers fight your way through the hordes of enemies, a massive bronze dragon serving the hobgoblins attacks your group. You kill it with the help of a female elven lich, but take grevious losses.

Chapter 13
The Lich asks you to come with her and free one of the so-called things in the dark from a stronghold in the mountains of the dwarven empire. The lich wishes to harm the gods, and many in your party have no love of the gods and don’t object, wishing to learn the creatures secrets. However, a Deva in silver armor comes down from the heavens and asks you to come with him to destroy the beast. The vast majority of the party goes with the lich. On the way to the stronghold, you are attacked by a human cultist and several goblin cultists with their eyes mutilated or carved out. They say it is not mortals business to see the forms of the gods. Finally you reach the stronghold.

Chapter 14
A you fight into the stronghold, you are attacked by more cultists of the gods. There is more iconography of brutalized eyes, and the cultists have all blinded themselves. They see with a strange kind of magic. Despite their astral power, you slay them and find the thing in the dark. It says its name is Scelerat, and it embodies the Cunning and selfishness of mortals. The gods had torn it out of the mortal races and hid it in another plane. But with this tear between dimensions it has escaped. The gods had to hide it in this hastily made and poorly defended stronghold. With this, most of your party fully rebels against the gods and prepares to free the rest of the things in the dark, and with them humankind. 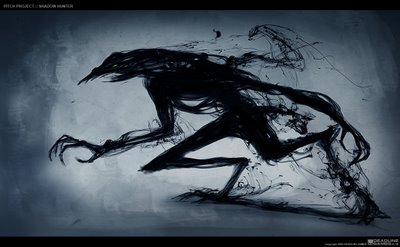 Things in the Dark Comments

Hello Players!
Feel free to ask any questions in the comments section. I’ll answer as soon as I see your comment.

I'm sorry, but we no longer support this web browser. Please upgrade your browser or install Chrome or Firefox to enjoy the full functionality of this site.